Minhaz Abedin, 18, and Takyiwa Danso, 23, were selected as official Youth Delegates to represent the UK at the United Nations General Assembly two weeks ago. In this post, they share their thoughts and experiences from the build up and during the high level week at the UN in New York.

Minhaz: On July 4th, I was selected to be one of two UK Youth Delegates joining the UK Diplomatic Mission to the 71st United Nations General Assembly in New York. Usually with such news, you are given a few days to come to terms with the reality. However, a few days later, I was already stood on stage being publicly announced at the Girls Education Forum by the then Secretary of State, Justine Greening. This set the tone for what was to become my most awe-inspiring yet challenging experience yet!

Takyiwa:  From the 18th-25th September I travelled to New York to attend the 71st United Nations General Assembly (UNGA) as one of two UK Youth Delegates. From the moment I found out that I would be going to the UNGA, I had been counting down the days until I could get on that plane! A mixture of excitement and trepidation on what to expect clouded my thoughts everyday, feeling as though there was an immense unexpected pressure with the role that came with the buzz and excitement. 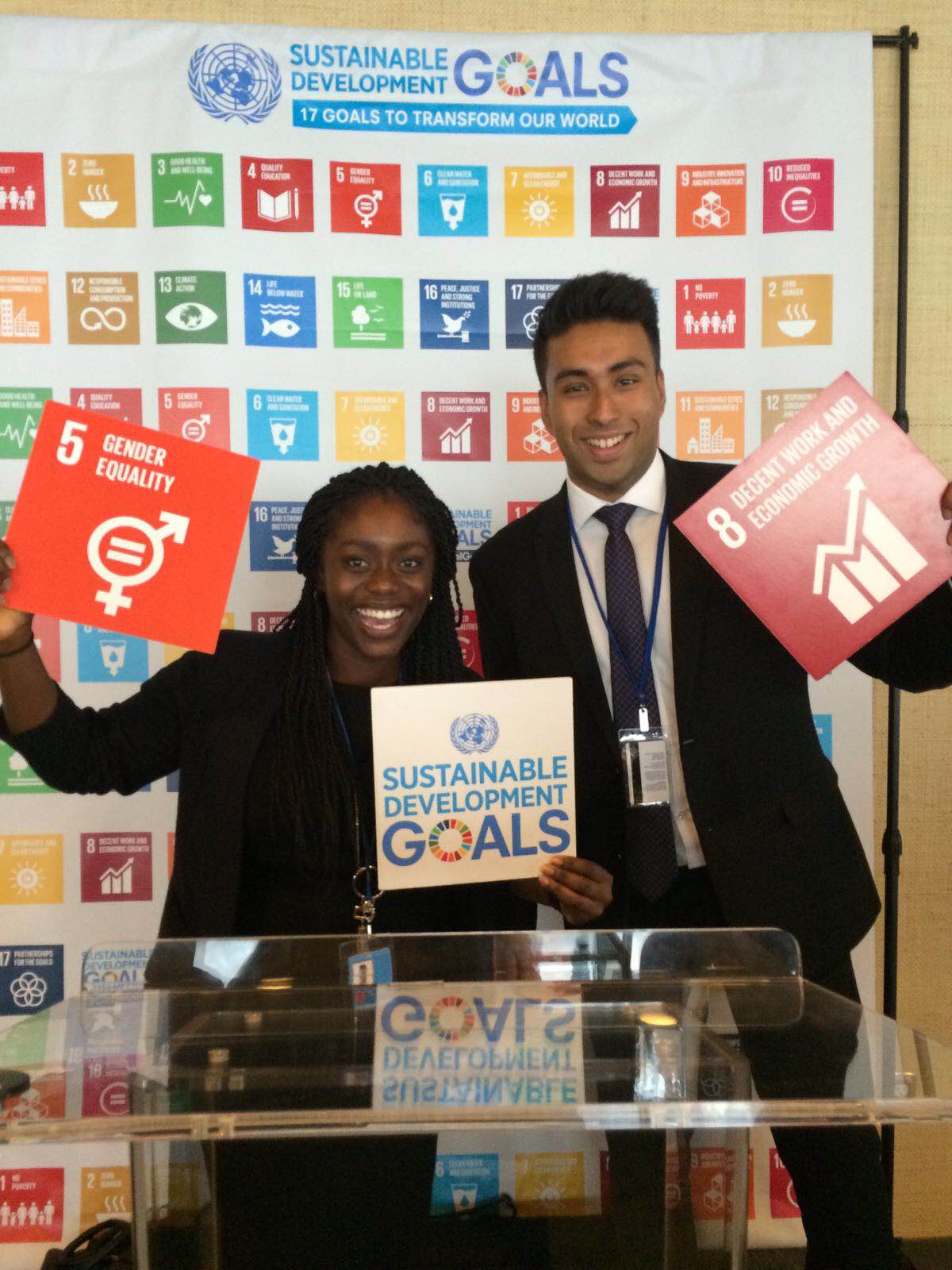 Takyiwa:  Personally, I wanted to act as a role model for people in my own community to demonstrate that your passion can drive your ability to change the world, regardless of your background. The voices, opinions and ideas I gathered during these focus groups helped guide my own interactions at the General Assembly, driving me to highlight the need for not only greater transparency of UN processes and but also a wider understanding of the global goals and their critical importance to global efforts in eradicating poverty and inequality.” 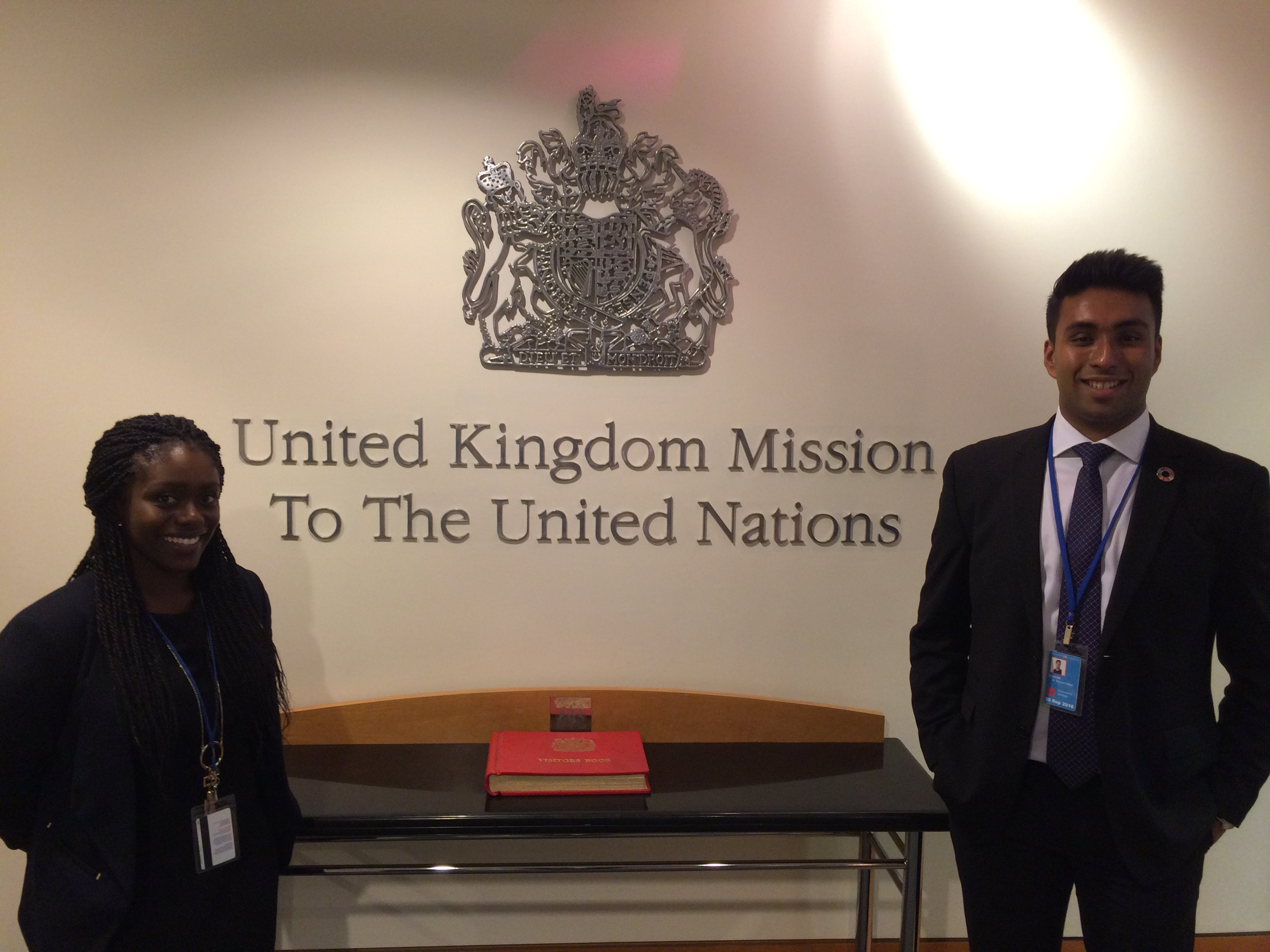 Minhaz: 4am on the morning of UNGA, New York transforms itself into a foreign land of police, checkpoints and convoys. Takyiwa and I were given blue passes which gave us the same access as another UK Diplomat. UNGA is this bubble of leaders from every nation on earth and we were right at the centre of it. During the week, we had to get used to walking past heads of state, royalty and high-profile individuals on the street. At one point, I was waiting at a crossing with the President of Costa Rica and Princess Mary from Denmark!”

From meeting ambassadors to Ban Ki-Moon, @DFID_UK Youth Delegates have another update for you from #UNGA in New York @Tatch09 @MinhazMA_ pic.twitter.com/9wy43uTdcA

Takyiwa:  We set ourselves three objectives for our time in New York. We wanted to represent young people from the UK and ensure that youth voices were present during the proceedings of the week; we were to be advocates calling on governments and civil society members to work better and more meaningfully with young people; as well as to share our experiences and views on the sustainable development agenda and how we and young people around the world want to be involved in this change.”

Minhaz:  Within two hours of landing we were already sat in Ambassador Matthew Rycroft’s (UK Ambassador to the UN) lounge, speaking on topics ranging from youth politics to how it was to sit in the UN Security Council. What shocked me most was how open and receptive the Ambassador was to having two young people question him, but as UNGA progressed, it became clear that this was a commonly held attitude.” 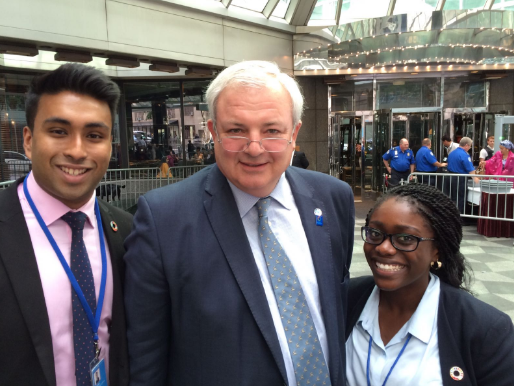 Takyiwa:  Over the week, I enjoyed many memorable moments that will stay with me, from speaking at the Plan UK’s ‘Real Choices, Real Lives’ event on understanding girls’ experiences to taking part in the Countering Violent Extremism workshop. If I had to pick a favourite moment however, it would have to be the High-Level Panel on Women’s Economic Empowerment, it was just an incredible atmosphere and environment to be in! The women were such strong and inspiring speakers, both on the panel and in the room itself, and then Ban-Ki Moon came in to give his keynote speech (I couldn’t quite believe my eyes!). I got a real sense of what he has been able to push through with UN Women and how much they’ve achieved as a movement within the UN’s political mechanisms.”

Minhaz: One of the highlights for me was giving a speech at an event focussed on youth employability, which the Secretary of State, Priti Patel later closed. It was great to be able to advocate on behalf of young people around the world, who just want an opportunity to make a better life for themselves and their families. What wasn’t so great was the fact that Takyiwa and I were the only young people in the room – despite the fact that the event was all about youth jobs! For me this demonstrates the problem; we must put pressure on those that have the power to make decisions that affect young people to meaningfully involve us in the discussion.”

.@WFP best quote of the #SDGAlive event from Amir Abdallah! Thank you @UNDP for an insightful and interesting panel! pic.twitter.com/QhZNO9GBLG

Takyiwa:  A year on from the launch of the SDGs, I wondered whether the position and perception of young people on a ‘political level’ had changed at all? I found that although there were different forums for youth to be heard, it wasn’t enough or wholly accessible to everyone – the youth agenda should no longer be a side event, but within the heart of actual discussions instead.”

Minhaz: This trip was a success in what Takyiwa and I accomplished whilst in New York but the job is not done until young people are truly represented in the United Nations.”