Douglas Imaralu (@jefumare) is an Atlas Corps Fellow/Partnerships and Communications Fellow at the US hub of Restless Development. In the latest of his Q&As he speaks to Komal Ahmad about her response  to hunger.

Sometimes,  we spend too much time on problems  where the  solutions are right before us, because we ignore what  truly matters. For instance, the world spends more time trying to solve problems than it needs to, yet ignores a very potent resource – 1.8 billion young people.

I strongly believe the solution to some of the world’s most difficult problem lies with young people. Yes, someone in your community or class has the solution to that nagging problem. But because young people are not given enough opportunity to participate, their thoughts and ideas are too often overlooked.

“I see young people defying the odds and leaving their mark by stepping out of their comfort zones.” I bet the quote above, by Restless Development’s Zambian Accountability Advocate; Lombe Tembo resonates, one way or the other – I mean, we almost always come across the words “step out of your comfort zone” in life and business. But, for some people, there really is no comfort zone. No box to think-outside-of. No food to eat.

So I was blown away by Komal Ahmad, Founder/CEO of Copia her presentation at the Nexus Global Youth Summit on solving the “world’s dumbest problem”: hunger. Komal, a young American woman  whose simple idea ( combined with technology) aims to stop hunger in its tracks, is proof that young people have the capacity and competence to lead and deliver change and development. Her company, Copia, makes it easy for businesses to donate excess food to communities in need. The company is building technology to end food waste and solve hunger. Put simply, they are redistributing food from where it is surplus, to where it’s most needed via an app.  And although there are other factors that need to be considered if food redistribution would end hunger, this idea, which smacks of ending inequality, is arguably at the centre of it. However, what excites me the most is that it stems from a young person. Now, think about 1.8 billion young people globally, and how that could be a resource to ending some of the world’s gravest challenges. 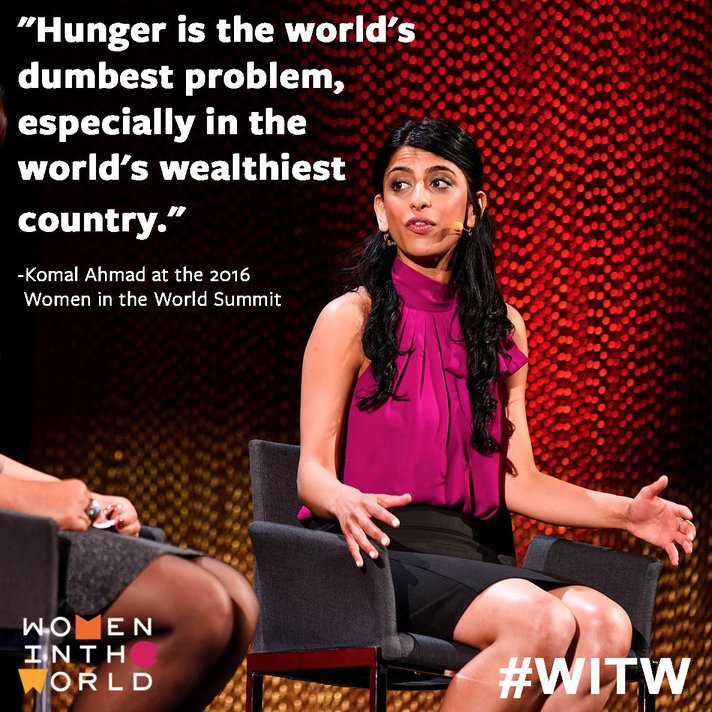 The world’s dumbest problem knows no barriers. Even in the richest country, it persists. But this is because so much food goes to waste daily – an  estimated 70 billion pounds of food waste in America each year.  It doesn’t end there. An estimated 25 – 40% of food grown, processed and transported in the US will never be consumed.  Meanwhile, 21,000 die of hunger and hunger-related causes every day! So, I sat down with Komal as she shared her thoughts on Copia, hunger and her journey as an entrepreneur.

“In a world with so much abundance, so much talent and innovation, so many go without food“

What entrepreneurial myth do you disagree with? Why?

The myth that success is dependent on luck is something that I find grossly inaccurate. Success isn’t about luck; it’s about hard work, determination, and utter resilience in the face of complete doom. Bill Gates was the beneficiary of extraordinary luck (in addition to being smart and resourceful), but scores of less celebrated businesspeople prospered with hard work, drive, and intelligence. These things take people much further than waiting for their entrepreneurial ‘ship’ to come in.

As a daughter of immigrant parents, what’s your story? How did you go about founding a company to solve “the world’s dumbest problem”?

I was born in Lahore, Pakistan. We didn’t have much, and the pursuit of a better life led my parents to the decision of immigrating to America. But they didn’t leave everything behind — they would constantly remind me, “Don’t throw away your food. People are starving in Pakistan.” It was a basic and valuable lesson that stayed with me.

Then, a few years ago, I realized the problem expanded beyond Pakistan; it was prevalent in one of the wealthiest countries in the world. I was a student at UC Berkeley, walking down the street when I encountered a homeless man begging for food. Something about him compelled me to stop and invite him to join me for a meal. After literally scarfing down his food, he began sharing his story. His name was John, and he had just returned home after serving our country abroad. He had been waiting for weeks for his military benefits to kick in, and because they hadn’t, John had been left on the streets to starve. He hadn’t eaten in three whole days. Imagine 3 whole days without food!

I was outraged. I couldn’t believe that a veteran who had made the most selfless sacrifice had returned home only to face yet another battle: that of hunger and homelessness. Adding insult to injury, right across the street from where John and I were eating, we watched Berkeley’s dining hall throw away thousands of pounds of edible food.

This was my first glimpse at this shocking disparity of access to food. In that brief moment, I witnessed food being thrown away on one side of the street and people starving on the other. It was through a short conversation with a person I might have otherwise walked right by that I realized the true purpose of my life and the true essence of COPIA — connecting those with excess to those in need.

Estimated 25-40% of food grown, processed and transported in the USA is wasted

Why is hunger the world’s dumbest problem?

Hunger is prevalent, not just in the poorest nations in the world, but also in one of the wealthiest. 50 million Americans go without food every day in America, while over 365M pounds of perfectly edible food is wasted. To be clear, I’m not talking about last night’s leftover pad thai or this morning’s half eaten pastries, but over 1M pounds of untouched food wasted for every man, woman, and child in America.

And this is exactly what makes this the world’s dumbest problems – that in a world with so much abundance, so much talent and innovation, so many go without food.

What is Copia’s plan for countries that suffer most from poverty and hunger?

The first step is to truly understand the problem so we can create a playbook to scale our operations to meet the global need.


August 12th was International Youth Day, with the theme “The Role of Youth in Eradicating Poverty and Achieving Sustainable Consumption and Production”. What can be done to change the approach towards these issues?

We are on a mission to eradicate hunger and to accomplish this we are making a seamless, simple process with great benefits to incentivize donation over waste.

Young people make up half the population of the world today – 1.8 billion, the highest the world has ever seen. How can this potential resource be channeled towards solving the biggest problems the world faces today?

Before you talk about health or education, you have to be able to provide food to nourish minds and bodies, for growth.  In the 21st century, you need young people who are able to leverage technology to address these very real global problems and disrupt existing systems with novel solutions.