My journey towards being an active citizen

Thomas Payton-Greene has always cared about global issues. But building the confidence to take action on the issues you care about can be tough. This is Thomas’ journey to becoming an active citizen.

I first found about Youth Stop AIDS through Phil at Restless Development.  She shared with me all of the amazing things that Restless were involved in and encouraged me to attend the Youth Stop AIDS Speaker Tour when it was due to take place in my city, Sheffield.

The speaker event was incredible, and opened my eyes to the current global issues surrounding HIV and AIDS. Hearing the speakers’ first hand experiences was inspiring and motivational, and allowed me to better understand the global context and what I can do about it.

In a nutshell, after the amazing progress throughout the 80’s and 90’s to combat HIV and AIDS, the Western perception is that it’s no longer an issue. This reduced focus has caused an increase in HIV and AIDS-related deaths – particularly among young people. Hence the campaign tag line ‘It Ain’t Over’. 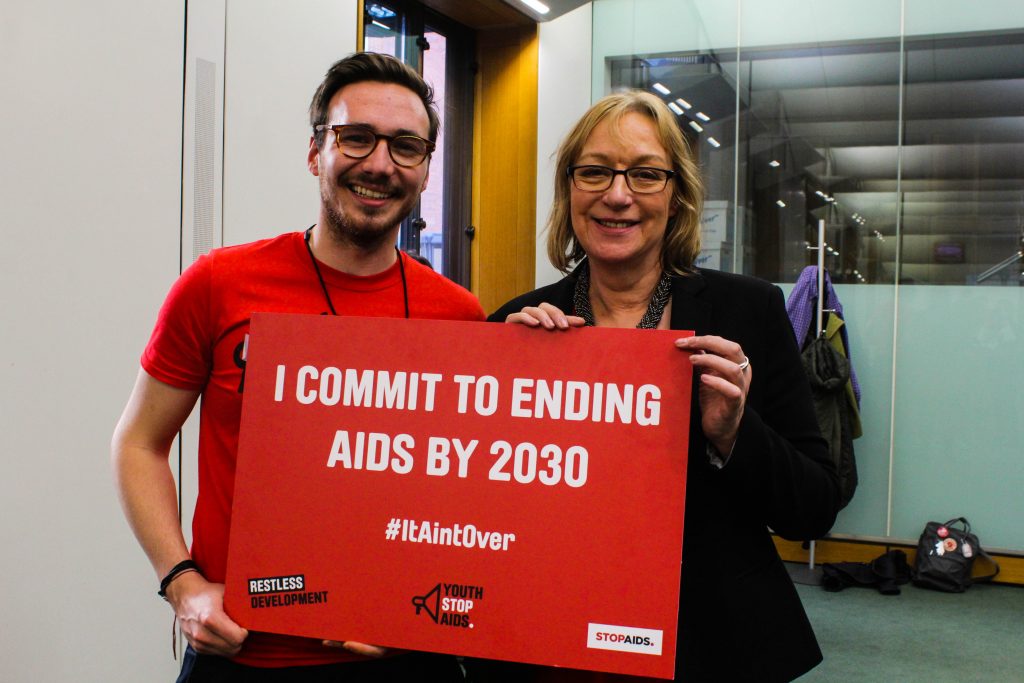 It has only been since volunteering  and taking part in Restless’ campaigns, that I have realised how the small steps we take as individuals can contribute to problems around the globe – however large, distant or daunting.

I always saw myself as the type to take part in a campaign on global issues, or to lobby an MP in Parliament. But it is only now, at age 25, that I’m learning how to do that and gaining enough confidence to make this version of myself a reality.

After leaving the talk, with a freshly pinned red ribbon symbolising solidarity with those living  with HIV & AIDS, I received another email from Phil. The next step in the campaign was the Day of Action in London. It would be my first, and so naturally I met the idea with hesitation. But still enthused by the  Speaker Tour, I was ready to see how I could make an impact and what campaigning looked like.

Being from the North, it is very easy to be cut off from events like this in London because of time and travel costs. I would not have been able to take part in this event if Restless hadn’t paid for my train, and I am so grateful that they did. It’s a testament to their ethos of empowering all youth to become change makers.

Before the day itself, I was sent instructions on inviting my MP to Parliament to discuss the campaign. This was a big thing for me and so it was useful to have some help. Thankfully, my MP e-mailed back promptly and we set a time to meet in Portcullis House at Westminster.

The Day of Action 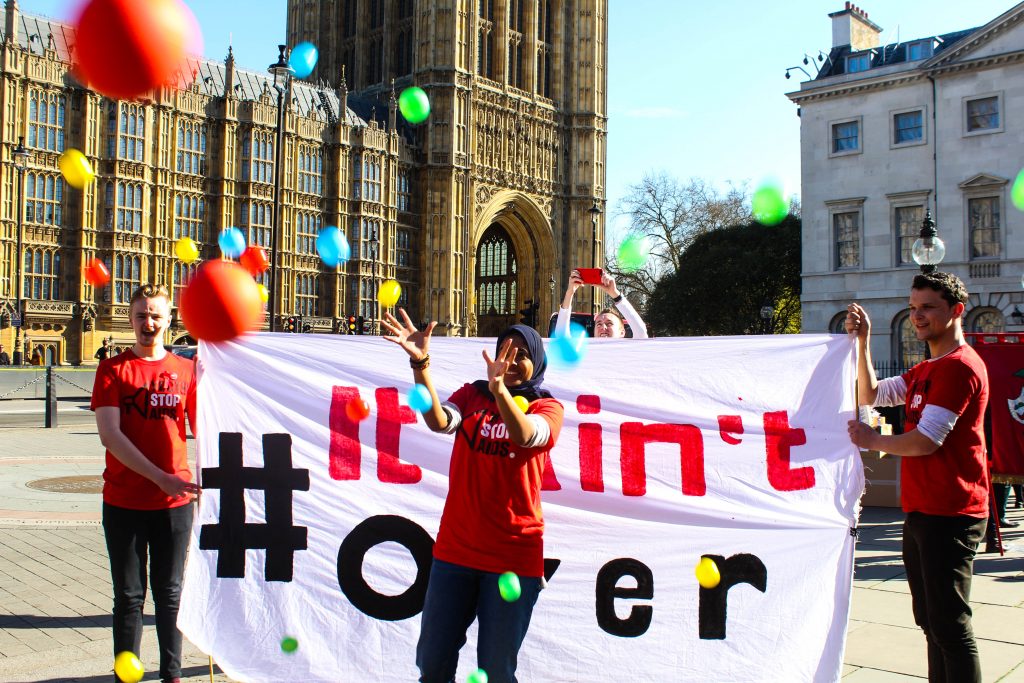 On the day, we spent the morning being trained on the big issues relating to HIV and AIDS, how our government has a role in the global context, how to speak to MPs and what action we can take. The crash course from the Restless team was fast, fun and clear. It just shows that you don’t need a lot of time or information to gain an understanding of a huge issue, and makes me wonder why this kind of education isn’t provided in schools – especially the information about how politics works and how health issues impact societies on a national and global scale.

Following the training we headed to Westminster to stage an awareness raising stunt, urging the Government to keep its eye on the ball with the global epidemic by throwing colourful balls at each other. I know some people are sceptical about the impact of doing this sort of thing, myself included in the past, but it creates good images to share online and helps capture the attention of the public.

After the stunt we went onto the main event of the day: meeting our MPs. This was equally exciting and scary – excited for the new experience but daunted by the setting of Portcullis House, where hundreds of busy looking MPs and officials dash and discuss in suits and smart attire.

The first MP to join us was James Wharton, Parliamentary Under-Secretary for the Department of International Development (DFID).  He made a speech in support of the campaign and within it was a message that I’d never considered before, but seems obvious now. It’s an MPs job to serve the public, if they are equipped with the support of the public to do something, then it is their duty to make it happen. So, campaigns like this are vital to ensure that, among all the many areas to be worked on, the most important issues to the public are focused on by Parliament. This is the clearest argument for campaigning and lobbying that I have heard and it really inspired me to commit to a life of lobbying. 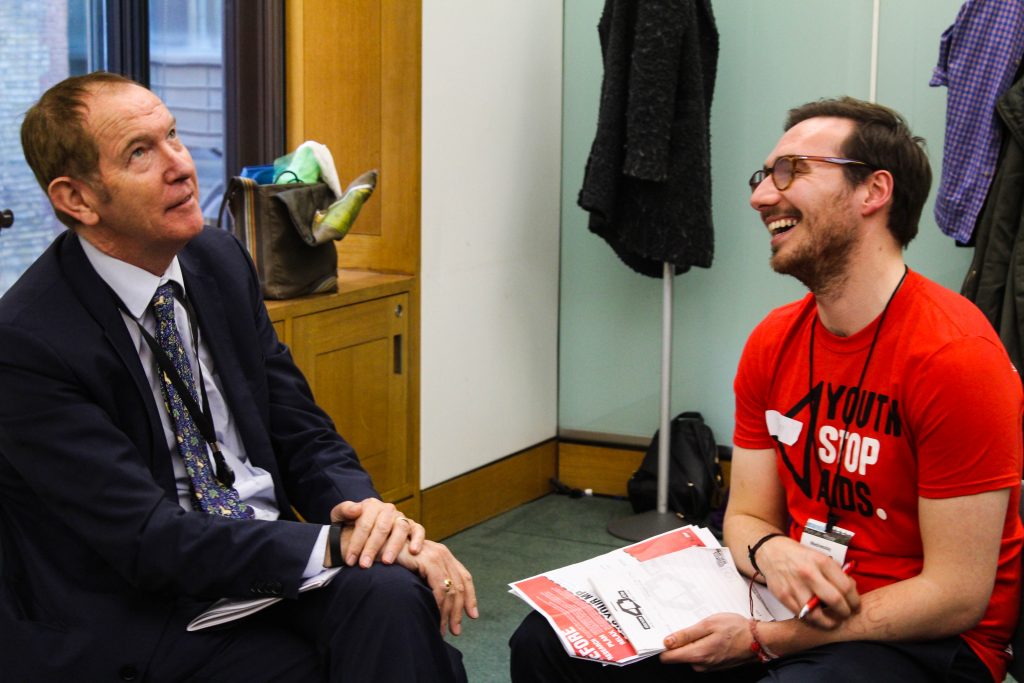 Over the next two hours, MPs came and went, meeting their respective constituents to discuss what role they can play in the effort to end HIV and AIDS by 2030. Campaigners that were waiting around worked on building a giant  timeline across the room, which outlined the progress made throughout the HIV and AIDS epidemic. At points we had MPs and Lords sat taking a closer look at the room wide map with us.

As the clock ticked by I alternated between flashing my eyes towards the door to spot my MP, Kevin Barron, and down to my info sheet to revise what I was going to say. When I saw Kevin enter gingerly I hurled myself towards him, the nerves now turned to energy. We took a seat and I quickly relaxed once we’d started to introduce ourselves and talk about local matters in Rotherham.

I guided Kevin through what we’d learnt about HIV and AIDS and how he could play a part. We were asking MPs to push for a department-wide audit of DFID’s work on HIV and AIDS strategy, and encouraged them to send  letters, spread awareness, ask Parliamentary questions and sign the Early Day Motion on the topic. Kevin was interested and eager to do whatever he could to help, offering to go even further and try to put together a debate on the matter.

Eventually a bell rang signalling time for Kevin to be somewhere, so we got a quick photo with a campaign sign before saying goodbye – until next time. I was overcome with happiness at his response to the campaign, and for the first time I could see how my action as an individual can lead to political action at the highest level. It hit home to me how important it is to get behind and act on what you believe in, because you can be the difference. 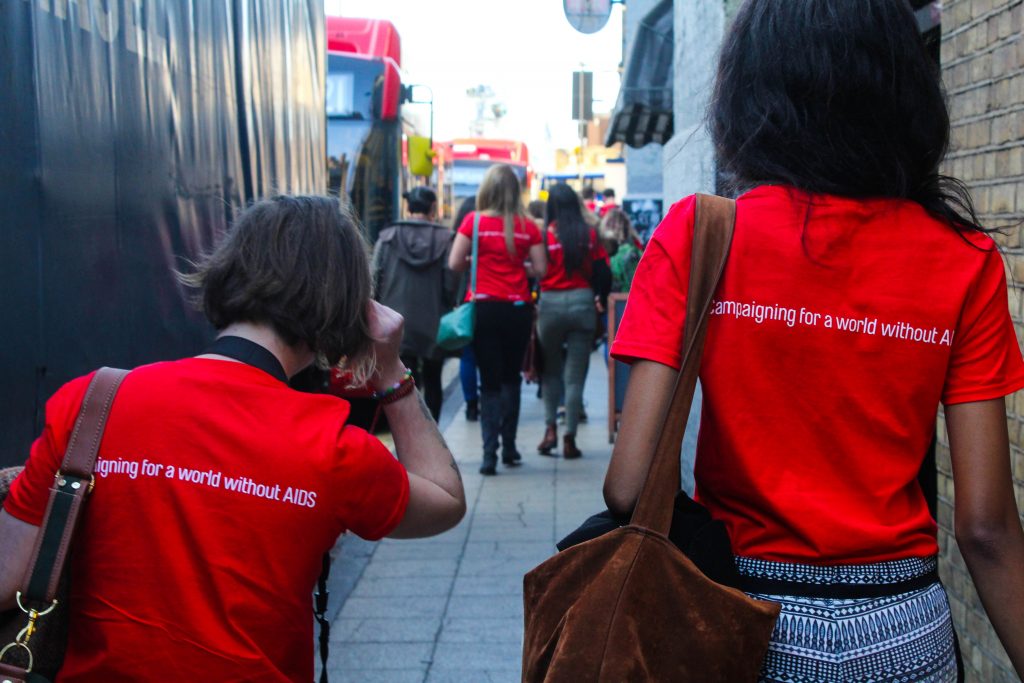 Later that evening as we walked for the bus, I was processing the day and wanted to share how I felt. Walking with Phil, who started this journey for me, I thanked her for the impact that her and her organisation’s actions have had on me.

Poetry as resistance: No More Ache

That day was truly one of the happiest of my life. It encompassed so many things that I have always wanted and signified a huge step towards the life I want to lead and the person I want to be. The whole process of exposure, learning, experience and confidence building has unlocked in me someone who has a hunger for positive change and the tools to make it happen.

I am learning about the things that are most important to me, and I am learning how to do the things that make me happiest. I am inspired, motivated, empowered and hopeful. Hopeful that if I can become this way, and empower the people around me, that they in turn can empower the people around them.  Soon enough, we can all pull together for collective good and have a chance for a better world.

I know that sounds very hippy and ‘free love’ but lets face it, it’s true. If being an active global citizen was pushed more widely, then I believe more people would  engage in the issues that matter to them and spread love and compassion towards humanity.  If you truly believe in a better world, you have a duty to act and advocate for it, and make sure t people are given the correct messages instead of being driven by the agenda of TV and newspapers.

To finish on a positive note, I would like to say thank you to Restless Development for running this campaign, as well as all the other amazing work they do.

Here’s to a long life of campaigning for social good!

My journey towards being an active citizen

World Girl-Centered Programming: By Girls, With Girls an…