What it takes to ‘Make a Life’: The youth unemployment agenda

In April 2018 Restless Development hosted a workshop at Murray Edwards College at Cambridge University called ‘Getting By: How will young people make a living?’ The workshop followed the findings of a joint research project looking into the issues young people face working in developing and emerging economies.

The findings of the workshop were compiled into the ‘Making a Life’ report. Poppy Bullen from Restless Developments Global Communications team asked the youth participants of the workshop, preferably known as ‘Gamechangers’ for their thoughts on the report.

One of the biggest challenges the world is facing is the lack of decent work for young people in the global south.

The world health organisation has estimated that there will be 1 billion young people entering the job force in the next decade but there will only be jobs for 40% of them. What will happen to the others

This week are launching an exciting new research report following on from out Getting By research released back in April.

The ‘Making a life: a youth employment agenda’ report summaries the key ideas generated from discussions of the four-day workshop held at Cambridge University and recommends how we can address the challenge of insufficient decent work for young people from the global south.

Digital activist and Law Graduate, 23 years old Marwa Azelmat from Morocco is part of the UN Women Gender Agora Task Force and Inota Cheta from Zambia is the Co-founder of She Entrepreneur. They were selected to participate in the Peak Youth & Make a Living Workshop alongside other relevant stakeholders such as the World Bank, ILO, MasterCard Foundation. Youth delegates and experts consulted on the decent work agenda. The findings served as the core of the ‘Making a life’ report.

Why is it important for others to read the ‘Making a Life’ report?

“Although youth unemployment is a real issue adding layers of vulnerability in the course of development, it is still under-researched and somewhat under-discussed. This report includes challenges concerning the recent work agenda while also mainstreaming gender at all levels.”  – Marwa 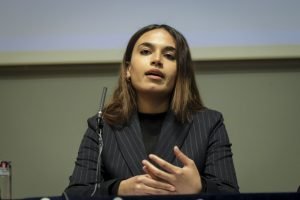 Marwa on the Panel at the Getting By Workshop

“Youth unemployment is a widespread problem in Africa and increased population growth in the coming years will further exacerbates the situation. The report explores the issue of unemployment and the need for the creation of decent jobs for youth.” – Inota

What are your key takeaways from the ‘Making a life’ report?

“The lack of capital and mentoring hinders the formalization of many emerging companies, whereas the lack of gender-aware tools restricts the full potential women and men might reach otherwise. Climate change uncertainties are often ignored in research despite natural resources being apart of the core of rural livelihoods in Africa.

“The workshop worked on recommendations of the understanding that young people are merely getting by rather than making a life.”  – Marwa 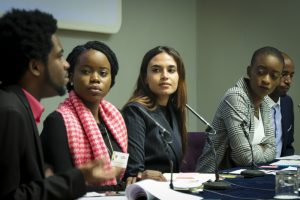 “The portfolio approach to livelihood that youth in Africa take particularly struck me because while certain youth might be included in employment statistics, some statistics represent youth who are underemployed and are therefore engaged in multiple activities in order to get by. This means the need for decent jobs is more grave than it may appear to be.” – Inota

My Fundraising experience: A joy and a privilege

What do you think needs to happen in the next steps following this research?

“There is no “one size fits all” solution, however, there are common suggested improvements including the widening of studies beyond short-term effects and one-dimensional indicators to encompass participatory, empirical research and global societal trends.

“It is critical to outline the demographic characteristics alongside the implications of the political context into the broader perspective of the youth employment challenge as well as the future of work. The dynamics not only need to be locally assessed, but they also need to be acknowledged during public policy debate and hold leaders to account.

“Development practitioners should be mindful of the shifts in the nature of work, the aspirations young people have for the future, and the disrupting rise of emerging technologies in order to establish an inclusive and sustainable structural transformation that fosters employment from within.”  – Marwa 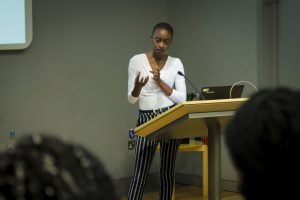 Inota speaking the Getting By audience

“Dissemination of information to key policymakers will enable them to make informed decisions. “Young people need to play the role of activists in the lobbying for creation of decent jobs in their respective countries. This requires the input of public and private sector; public sector as players in creating a conducive environment and private sector as agents in creating jobs.”  – Inota

What it takes to ‘Make a Life’: The youth unemployment agenda

Africa Education beyond classes, changemakers with a diff…
0
Loading Comments...